In March this year, I attended a festival called Nagashi-bina that was held in my neighbouring town of Yakage. This festival involved a beautiful procession through the town by women and children dressed in colourful kimono. The procession makes its way to the river where the women and children as well as the general public make their way to the water’s edge and set little dolls in paper boats to sail down the river. It is said that the purpose of this festval is so the dolls can carry away bad luck. It was a very interesting festival to observe and there were also dances by the ladies, delicious food stalls and local craft goods on sale. The bright and colourful costumes meant there were lots of opportunities to take some great photos, especially the main figure, a beautiful girl dressed in a princess’s red kimono.

This is a photo of the main lady (I will call her the Princess) shortly after the procession started through the street. A red carpet had been laid down and she had a following of perhaps 50 other festival participants, all dressed in different sets of kimono. I managed to get to the edge of the carpet to snap this shot and I think it really shows of the vibrancy of this festival. You can see the line of ladies behind the Princess, only she is allowed on the red carpet.

Now to show you what I did to this photo in Lightroom. I didn’t actually change much to this one, the colours and composition were pretty great already. Let’s take a look at some screenshots I took while working in Lightroom. 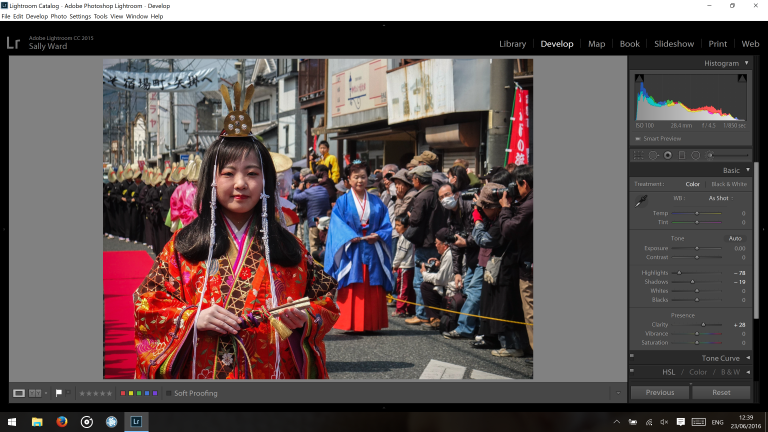 You can see that I made only minimal changes, mainly to the highlights where I have turned it down quite considerably. This brought out more detail in the shadows on the Princess’s face and I think has made the colour pop a bit more. I also tweaked the shadows and clarity ever so slightly.

In the second screenshot, you can see that I also cropped the photo. The original image was a bit larger than the finished piece. I think getting rid of those two edges of the image brings the focus more onto the Princess without too much of the busy background getting in the way.

Here’s some more detail showing the before and after effects of my editing. The image on the right is before any editing:

In this close up shot, you can see the effect changing the highlights has made on the shadows on the Princess’s face and hair. I think it makes it more defined and striking.

As I am still experimenting with Lightroom, I feel my photos are going to have very similar changes made to them until I learn to use the more advanced tools the software has to offer. I recently watched a tutorial about processing photos into black and white but it seems a shame to take the colour from these images. I plan on experimenting with black and white in a later post.

For now, I will make a series of posts focusing on this festival as I got a few decent shots that I would like to talk about. I have played with some of Lightroom’s presets and also experimented more heavily with the radial filter tool with varying success. Stay tuned for Part 2 and don’t forget to follow me on Instagram for more photos.